skip to main | skip to sidebar

Hey all, since I had some oysters and artichoke casserole leftover from New Years Day dinner, I decided to put them to good use. Oysters and artichoke go great together as well as oysters and bacon, ie.. Angels on Horseback. That being said, I combined the flavors in a traditional jalapeno popper and I think they came out fantastic. 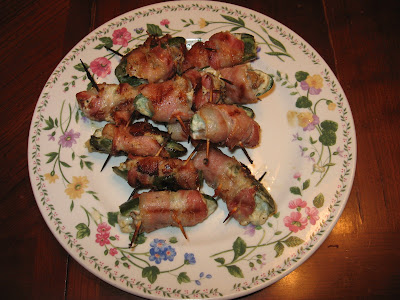 Slice your peppers in half lengthwise and remove the seeds. Combine the last 4 ingredients in a mixing bowl and blend thoroughly. Fill the sliced pepper half with the cream cheese/artichoke mix. Place an oyster on top and wrap with a slice of bacon. Hold the bacon and oyster in place by skewing through the jalapeno, oyster and bacon with 2 toothpicks. They are now ready for the grill. Cook these over low direct heat for about 10 or 12 minutes turning occasionally to sear the outsides and crisp the bacon.

Nothing could be easier and they really a delicious treat. I hope yall try them and enjoy as much as I did.

Your blog keeps getting better and better! Your older articles are not as good as newer ones you have a lot more creativity and originality now keep it up!

Gooey Ducks grow to about two pounds in four or five years.
[url=http://www.gooey-duck.com/]geoduck[/url]

I read so much helpful data above!

It really brings out the flavor, but for some reason I never make it. I should - it's a perfect holiday treat.I can't wait to be back to cooking again!

GOOD food and a GREAT atmosphere! We eat there about once a month- I LOVE this place New Orleans Bar and Grill

Gaston
Mandeville, Louisiana, United States
Hey Yall, this blog is dedicated to the wonderful cooking of south Louisiana. It's all about that world famous Cajun and Creole flavor. Please enjoy the free video recipes that we prepare for you and let us know what you think. Enjoy!!!!!

Get the latest dirt on dat